The draft document is linked right at the bottom of the consulation page, again here

Everyone benefits from sustainable transport because it means that we are:
• Keeping the air cleaner through alternative travel choices, such as walking, cycling to work, using public transport or using electric vehicles, while improving public health;
• Improving safety for travellers, especially for people with disabilities, children, older residents and other vulnerable road users such as pedestrians and cyclists;

1.13 In July 2019, the London Borough of Sutton declared a climate emergency, and pledged to make the borough carbon neutral. Air quality improvements and carbon reduction are byproducts of, and some of many reasons for, sustainable transport.

5.7 Essentially, more people in Sutton are choosing to use their car for journeys of less than 2km than anywhere else in London.

6.12 The existing number of cycling trips made each year in Sutton is 7,700, out of a total in outer London of 208,200 trips.
However, there is a potential for 234,900 daily cyclable trips, which would mean that 3% of all borough journeys would be by cycle. This
figure is higher than boroughs of similar size and population such as Harrow, Merton and Richmond upon Thames.
6.13 As with walkable trips, Sutton also has the highest number of potentially cyclable trips per resident that are currently made by a motorised mode of travel22.

Appendix F : no mention of cycleways 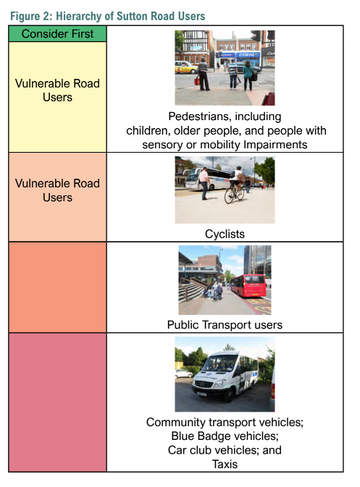