The council is consulting with the public about making changes to traffic movements in and around Cable Street.
The proposed changes are designed to alleviate the number of vehicles cutting through Cable Street to avoid congestion on The Highway.
There are a number of vehicles using Brodlove Lane and Cable Street as a ‘rat run’ to travel from The Highway to Butcher Row.
The changes to be considered by the public include one-way parts of Cable Street.
It is also proposed that a number of measures be introduced to make the area safer for pedestrians and cyclists.
A new bus lane will be created on a short section of Cable Street between Sutton Street and Watney Street. This will be supported by the closure of the north end of King David Lane to all motor vehicles.
The changes will see a significant reduction in the amount and speeds of traffic using Cable Street and surrounding roads.
In preliminary consultation with businesses and residents, the council was told cyclists are uncomfortable using the narrow two-way cycle lane.
The council proposes the cycle lane be widened for cyclists travelling against the traffic, with cyclists travelling the other way joining the main flow of reduced traffic.
The area between Shadwell Overground and DLR stations and Sutton Street will be completely redesigned to ensure priority for pedestrians.
The proposals will also see the introduction of pocket parks and improved community spaces to make the area look and feel more attractive.
Mayor of Tower Hamlets, John Biggs, said: “We have developed these proposals after being made aware of initial concerns from residents, businesses and people who travel through the area. These detailed and well developed plans will improve the area for all road users. We welcome any comments to ensure that we have taken everything into consideration.”
Cllr Ayas Miah, cabinet member for environment, added: “For far too long the safety of people using Cable Street has not been given enough priority. These proposed changes will stop vehicles from cutting through the area for the benefit of pedestrians and cyclists. The aesthetic changes proposed will enable all local people to be proud of the area that they live or work in.”
Full details of the proposals are being sent to 5,000 addresses along Cable Street and in the surrounding area. 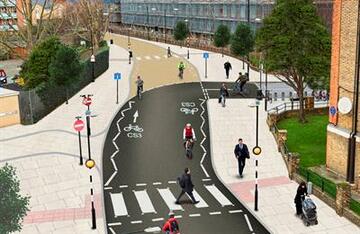